The Saudis Train for Air Combat: Tankers and F-15s Self Deploy to Red Flag 2014 The Saudis brought an air combat package from Saudi Arabia to this year’s Red Flag 2014 which represented a step change in capability. The Saudi F-15s came to the United States to train in one of the premier air combat training exercises in the world, Red Flag. They self-deployed as a unit: supported by two of their new tankers.

According to an Airbus Military press release :

Two A330 MRTTs were used to enable the deployment from Saudi Arabia to Nellis AFB in the USA on a three-leg journey of some 9,000nm (16,600km). After three weeks of highly realistic combat training in the USA, the fighters were returned home by the same means.

Staging through Moron AFB in Spain, and McGuire AFB in the USA, the A330 MRTT demonstrated its ability to support long-range oceanic deployments through the type’s first ever transatlantic deployment of fighters.

The two tankers were operated by the RSAF’s first combat-ready tranche of boom-qualified crews (pilots, air refuelling operators, mission operators) who successfully offloaded around a million pounds of fuel through the fly-by-wire boom during the mission despite challenging weather and light conditions.

Using the advanced planning systems of the MRTT, the crews were able to ensure complete safety of their respective formations through detailed real-time monitoring of the fuel state and diversion points of all the aircraft.

Airbus Defence and Space has been working with the RSAF since October last year to support the RSAF in the definition and accomplishment of the associated logistics – providing additional flight training, delivering spare Flyaway Kits and deploying technical specialists to the Main Operating Base as well as to fly on the missions. Philippe Galland said: “It was enormously satisfying to play our role in supporting this complex mission. “We greatly admire the RSAF’s accomplishment of this major deployment at a relatively early stage in their operation of the A330 MRTT.”

With the Middle East in flux, training for air combat is hardly an idle exercise. And Red Flag is as good as it gets for realistic combat training.

RED FLAG has expanded over time to incorporate all spectrums of warfare to include command and control, real-time intelligence, analysis and exploitation, and electronic warfare. Night missions have also been added to each exercise.

More than 30 countries have participated directly in a RED FLAG exercise with other nations as observers.

Recently, the Aussies have demonstrated the RAAF’s longer legs based on the use of their new Airbus tanker as well.

In an interview conducted at the tanker base in Australia with Squadron Leader Chetan Takalkar, Executive Officer of the No. 33 Squadron, the self-deployment capability for the RAAF enabled by the new tanker was highlighted.

I am departing tomorrow to support a trans-Pacific deployment of our Hornets.

We’ll meet our fighters just off the West Coast of America and then transit to Hawaii and thence Guam.

Then they’ll move from Guam back to Australia, all done in a matter of days For us, the KC-30 is a significant increase in capability and this deployment is an excellent demonstration of RAAF airpower.

Tanking can facilitate self deployment, but can lead to sustained operational capabilities as well.

The A330 MRTT tanker as a fleet provides the possibility for a network of flying air support systems engaged for a long time in an operational setting.

Much depends on how these assets become configured.

With the fuel carried in the wings, the large deck of the A330 can be used to host a variety of air support capabilities: routers, sensors, communication nodes, etc.

Such a configuration along with the fuel re-supply capabilities of the A330 tanker makes this a flying air operational support asset.

If the model selected is similar to the model down selected initially by the USAF, it is refuelable in flight.

With the space available in the aircraft – again because of the fact that the fuel for refueling is carried in the wings – a crew rest area can be provided.

This means that the air tankers can stay aloft for a significant period of time as the refuelers are themselves refueled.

This in turn means that the refueling aircraft as a fleet can have a strategic impact.

Once the planes are airborne and they have access to refuelers for their own operational autonomy, the fleet can tank a variety of national or coalition partners operating from dispersed or diverse airfields.

And the discretion possible airborne can allow nations to tank a variety of coalition partners, some of whom might not be favorite candidates if seen on the ground.

Nowhere is this more important than in areas with very constricted geography.

And the GCC states operate with very little strategic depth nation by nation. 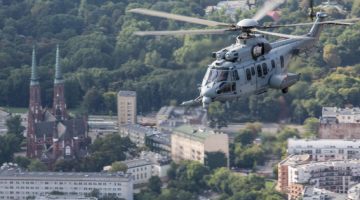