ICAP 2015: General Paloméros on the Future of Airpower Early in April 2015, an airpower conference was held in Istanbul and sponsored by the Turkish Air Force. The event, ICAP 2015, was held in Istanbul, Turkey and was attended by over 1000 participants from over 50 nations, with 29 air chiefs attending.

According to the organizers of the conference:

According to a press release by ACT:

ICAP is an international conference, organized in Turkey for the second time, and hosted by the Air War College with contributions from the Turkish Air Force. The aim of the academic discussions at ICAP 2015 is to ensure that the ‘principles of change’ within Air and Space Power are ‘clearly understood’.During his speech, SACT pointed out that future Air and Space power will be challenged externally by very adaptive competitors and adversaries, and internally by corrosive effects of budget constraints.”Major powers outside NATO have been developing modern fleets of interceptors for some time. They are also producing long-range missiles that can threaten specifically high-value assets. In fact, they are developing a mix of innovative concepts and technologies that can offset [NATO’s] military superiority,” SACT said.After having elaborated on a number of threats, SACT affirmed that the key is innovation: “This new environment offers indeed a great potential to increase our operational agility. In the future security environment, I believe that we must focus less and less on developing dedicated [and] specific means, equipment for a single purpose,” General Paloméros said.”Through innovation, we need to unleash the creativity of all stakeholders, taking into consideration a lot of very constructive inputs from Industry, innovative companies, and end users. We must adopt a pragmatic approach in our equipment design and acquisition. We must find the right balance between quantity and quality,” he added.General Paloméros added that training and exercises “will remain the capstone for ensuring the desired level of preparedness of our air capabilities”…”Exercising helps to bring together Allies and partners to test their interoperability from doctrine to equipment, find solutions to problems identified in operations, define how to react – and continue the mission with degraded capabilities.” SACT also used the occasion to remind the audience of “the biggest exercise NATO has conducted for a very long time.” Trident Juncture 2015 will assemble no less than 36.000 troops, with most of the exercise taking part in Italy, Portugal and Spain. 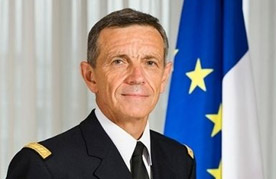