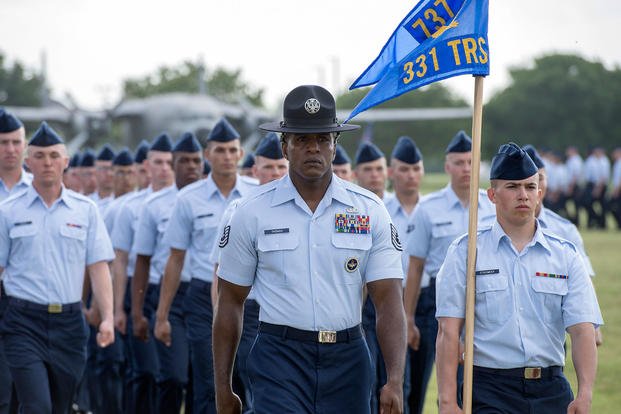 The first groups to experience the Air Force’s new, expanded Basic Military Training curriculum say the changes pushed learning outside the classroom, forcing recruits into a greater focus on leadership, collaboration and fitness.

The Air Force announced earlier this month it has expanded BMT from seven-and-a-half weeks to eight-and-a-half weeks in an effort to align more closely with Defense Secretary Jim Mattis’ heightened focus on readiness and lethality, and to mentor the next generation of leaders.

While the service in recent years has said it wants to better acknowledge how it selects airmen for particular career fields, BMT’s primary focus “is to create ‘Big-A’ airmen,” said Col. Jason Corrothers, 737th Training Group and BMT commander.

“We need all of them to be stronger, to be fitter, to have those habits of mind, those habits of body that strengthen our Air Force regardless of whatever particular career field that they’re called to serve in,” he said during a Nov. 16 interview.

It’s an effort to mold the next generation of 21st-century troops, or what Air Education and Training Command calls the “Mach-21 airman.”

The BMT curriculum has been enhanced with additional physical fitness training, combat skills training and weapons courses to train airmen for real-world events during the earliest days of their service.

“Whether or not that is a special warfare candidate, a defender … or Security Forces candidate or whether or not that’s a personnelist, every single person, every single graduate of Basic Military Training has to be afforded the same experience to include physical fitness … so that they start to be ready for any fight that our nation needs of them,” Corrothers said.

The BMT changes include: