Boeing has presented Marshall Aerospace and Defence Group with a Supplier of the Year award for its performance on the P-8 maritime patrol and reconnaissance aircraft. Marshall Aerospace and Defense Group, Supplier of the Year for the P-8

Boeing has presented Marshall Aerospace and Defence Group with a Supplier of the Year award for its performance on the P-8 maritime patrol and reconnaissance aircraft. (…) The company has more than 23,000 suppliers around the world and Marshall was one of only 15 businesses and one university to receive a Supplier of the Year award, presented during a ceremony in Chicago on 18th April 2014. (…)

The P-8 maritime patrol aircraft is a military derivative of Boeing’s Next Generation 737-800 and total orders for the P-8 platform could exceed 200, worldwide. (…) This latest award comes just two months after Marshall’s delivery of the 200th production auxiliary fuel tank in support of Boeing’s P-8 program and the company attaining a GOLD rating for delivery performance under the Boeing Enterprise Supplier Tool (BEST) rating system. 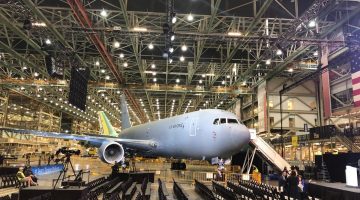