Re-Shaping the Insertion of Ground Forces: The USMC Leverages The Osprey

The evolution of USMC concepts of operations under the influence of the proliferation of the numbers and experience with the Osprey has been significant.

The evolution of USMC concepts of operations under the influence of the proliferation of the numbers and experience with the Osprey has been significant.

It is clearly to be anticipated that a similar experience will unfold, as the F-35B becomes part of the MAGTF in the decade ahead.

For the Marines, air power is part of the MAGTF, or put in simple terms, a key element allowing force insertion – built around the ground combat element – to occur in a diversity of settings and situations.

The reach and range of the Osprey has redefined operational dynamics at sea, from the sea and for land operations, including rethinking basic functions such as CASEVAC ops.

A key way to understand the difference between legacy approaches and evolving ones is to contrast a rotorcraft enabled ground force with a tilt-rotor and fast jet enabled force. 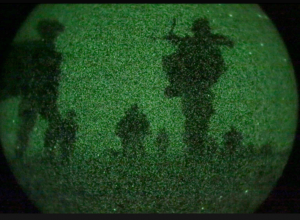 With the tilt-rotor and fast jet combination, the capability to disperse and aggregate force over a much larger area has become a reality.

At sea, this has meant that the USN-USMC team can now operate with a disaggregated three-ship task force covering more than 1000 miles in operational reach. On land, rather than focusing on a FOB defined AOR, one can think much more broadly about the Area of Interest.

A key area where the Marines are shaping a way forward is in working new ways for the Ground Combat Element in flight to prepare for their engagement when on the ground.

In a way, the connectivity technologies being worked on and refined by the Marines are providing an important compliment to the flexibility of the Osprey itself in terms of the ability to operate very flexibly in terms of approaches and departures from a landing zone.

The Marines have been experimenting over the past 15 months with  new ways to connect the GCE within an insertion mission, and they are optimistic that their exercises can lead relatively soon to a deployed capability with Marine Expeditionary Units and Special Purpose MAGTFs focused on crisis response missions.

These units, then, can subsequently use the initial capability and drive further innovation.

The approach has been to deploy the Ground Combat Element (GCE) over a tilt-rotor-enabled distance and to insert the force with situational awareness, which can enhance mission success.  By shaping new communications capability throughout the flight, the GCE getting off the Osprey is much better positioned for mission success.

With a shift from flying to engaging in a forward leaning operation, a number of key mobility requirements have been highlighted as well:

In other words, by working with a tilt-rotor-enabled force, the Marines are forward leaning their experimentation to procure technology that will enable new capabilities, and not simply fill legacy gaps.

To date, the process has evolved through the course of four exercises.

The process was started with an initial effort using local resources.

There is a growing sense that the GCE needs to better leverage the evolving capability of USMC aviation, and the exercises are one way to do a better job along these lines.

Captain Jason Deane of the Infantry Officer’s School (IOC) has summarized the approach and findings of this initial experiment in an article in the Marine Corps Gazette published in January 2014.

Given potential future urban littoral environments, the experiment sought to determine the following:

In addition, to connectivity lessons learned from the exercise, the Captain highlighted a key “gap” which has been the focus of the follow on exercises, but also highlights the need for technological innovation to follow the paths opened up by tilt-rotor technology, rather than staying in the rotorcraft enabled force era.

As was the case during this long-range raid, MV–22s quickly outrun all U.S. military rotary-wing close air support platforms—that is, unless these aircraft are forward staged near the objective area, which is by no means always practical or advisable if conducting a real-world mission.

Given rotary-wing close air support limitations when maximizing aspects of the MV–22’s potential, precision guided fires from naval platforms and/or fixed-wing CAS or armed unmanned aerial systems will typically be required to enable ground force actions within an objective area.

Such aviation assets might be on-station for hours prior to the ground force insert.

This said, if the ground force is flying to the objective area for hours in the back of MV–22s, we do not currently have the required capability to provide real-time information updates to our infantry Marines, to include still or full-motion video imagery.

What this meant for our mission was that once the force lifted off from Quantico, the lieutenants did not receive an update on enemy activity in the objective area until they were 10 minutes out from the objective.

This is an unacceptable information gap.

In this experiment, the CLT operated over a 96-hour period, going considerable distance, operating hundreds of miles from its HHQ, against an enemy with anti-access capabilities. The 600-mile aerial assault involved an initial destruction raid and then the force operated as the initial forcible entry capability for a follow-on joint force.

An interesting aspect of the experiment was to unintentionally highlight the limitations of the SHADOW UAV and to shape a clear need for a UAV which can be tossed out the back of the Osprey.

The SHADOW UAV is not expeditionary in any sense of the word, and the size of the team necessary to support it is a problem as well for an agile lean force looking for the kind of rapid force insertion enabled by the Osprey.

According to one report: “A potential employment concept would be to have a 5,10 or 50-100 pound “kamikaze” UAV stored in the cargo space areas of the MV-22” which can be used by the Fire Support Team as needed.

What clearly emerged from the initial two experiments was that a CLT empowered by the right kind of communications gear and able to work closely with aviation elements could operate effectively at a significant distance., while also providing a unique capability for combatant commanders.

But technology must continue to bend to the operational needs emergent from the concept of operation changes.

December 2013: Exercise Talon Reach whereby the CLT  conducted a NEO into a semi-permissive environment between 29 Palms and Ft Hood, TX.

In this experiment between 29 Palms and Fort Hood Texas the Marines pushed the envelope further.

The purpose of the experiment was the following:

One finding from the experiment, also known as TALON REACH I, that reinforced a similar finding from the Camp Blanding experiment was that “the GCE currently has  Joint Terminal Attack Controller (JTAC) and Joint Fires Observer (JFO) manning and equipping shortfalls that are needed to maximize our air combat element’s ever increasing capabilities on a distributed battlefield.”

According to Lt. Col. Bill Hendricks, a Cobra driver, and currently assigned to USMC Aviation Headquarters as the air-ground weapons requirements officer, the exercise:

Provided an opportunity to look at how mission planning can change significantly with the new configuration of insertion forces and how that approach can, in turn, significantly shorten the time from launch to operating in the objective area.

Rather than several hours on the ground planning the mission and then launching the force mission, now the time associated with the Rapid Response Planning Process can be significantly reduced.  A new process is being developed.

The insertion force takes off and then does the planning en route (given the range and time in transit) and provides real time information to the GCE and ACE commanders aboard the Osprey prior to going into the objective area.

March 2014: Exercise TALON REACH  II whereby a CLT from the training base in Twenty-nine Palms assaulted into an A2/AD environment against enemy positions located on San Clemente Island.

The latest experiment, TALON II, was built around a raid from 29 Palms to San Clemente Island.

According to the tasking:

Among the experiment’s primary objectives were the following:

At the heart of the exercise was to secure an airfield to support the concept of distributed STOVL operations as well.

This airfield was 23 kilometers from the enemy’s ASCM sites and required the CLT to conduct an all-night, dismounted movement to contact operation to secure it.  In the experiment, the F-35 surrogate, the Cat Bird” was used to provide DAS and other data to the CLT in flight and post-insertion.

And the F-35 working with an Osprey-enabled insertion force could well re-define the meaning of Close Air Support (CAS).  The F-35 could enter the objective area prior to the arrival of the CLT, push data back to the incoming force, and then provide fire support, “kinetic” and “non-kinetic,” C2 and ISR support during the insertion and operation.

Col. Mike Orr, the Commnading Officer of VMX-22, worked closely with the IOC in both TALON REACH exercises.

According to Orr, a key question being addressed by the series of exercises is the following:

What technology is out there today that could easily and inexpensively solve some of our connectivity challenges?

Is there smartphone and tablet technology that can be leveraged to re-shape situational awareness for the ground force?

The technological evolution – which is in effect a combat cloud empowering the force – carries with it changes in decision making as well.

According to Col. Orr:

We are pushing the concept of providing situational awareness to a much lower tactical level than we have ever done before.

We are empowering decision makers at a much lower level while shaping a robust ground and air picture for the overall force.

You would be amazed at what can be achieved as we move forward along these lines. And we are just beginning to understand the art of the possible.

We take an aggregate air picture which traditionally would be only available to an air operations center and push it down to the users at platoon or squad level.

My background as a Link-16 enabled aviator has taught me the benefits of increased situational awareness.

We are trying to take the increased situational awareness picture down to a junior level.

As General Mattis likes to say, we push information to the ‘point of discomfort’.

Amazing things can happen when we act this way.

Another way to look at this is re-shaping how the force is inserted to give it a higher probability of success or to provide for better risk management for the insertion of force itself.

Col. Orr noted that the innovation they are pursuing through the exercise is also very cost effective.

We are using tablet technologies to display the data and connect the force visually.

Rather than radios, tablets provide a very good way to connect the force in route.

We are looking to get away from proprietary and single mission technology to an applications based approach.

These C2 tools are becoming much more user friendly, and working via a tablet helps in that process.

And as the MEU draws upon this capability, the experiment will continue, but in real world operations.

That is the ultimate test of what experiments yield.