The UAS was still in development in 2001 when the Sept. 11 terrorist attacks against the United States created a greater need for intelligence, surveillance and reconnaissance (ISR) capabilities. 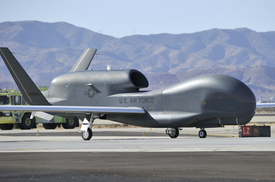 The UAS achieved a predetermined level of software maturity and the ability to demonstrate operational interoperability with other relevant systems prior to Milestone C approval. Global Hawk maintains estimated costs within cost caps and has full program funding for the length of the Future Years Defense Program. The Milestone Decision Authority approved Global Hawk’s updated Acquisition Strategy and Acquisition Program Baseline.

The UAS was still in development in 2001 when the Sept. 11 terrorist attacks against the United States created a greater need for intelligence, surveillance and reconnaissance (ISR) capabilities. Responding, Global Hawk quickly deployed into theatre where the system remains in support of worldwide Combatant Command operations.

“The most important date in any acquisition program is the day you get a new and needed capability into our warfighter’s hands,” said Mick Jaggers, director, Global Hawk, Northrop Grumman. “We have proven that we can successfully take systems like this through Milestone C and into full-rate production, even in times of war.”

“It is true testament to the U.S. Air Force and the Global Hawk industry team that we have been able to effectively support the warfighter for over a decade with a variety of sensor payload capabilities,” Jaggers added. “In working with the Air Force, we seek to fly a variety of additional payloads within size, weight, power and communication parameters.”