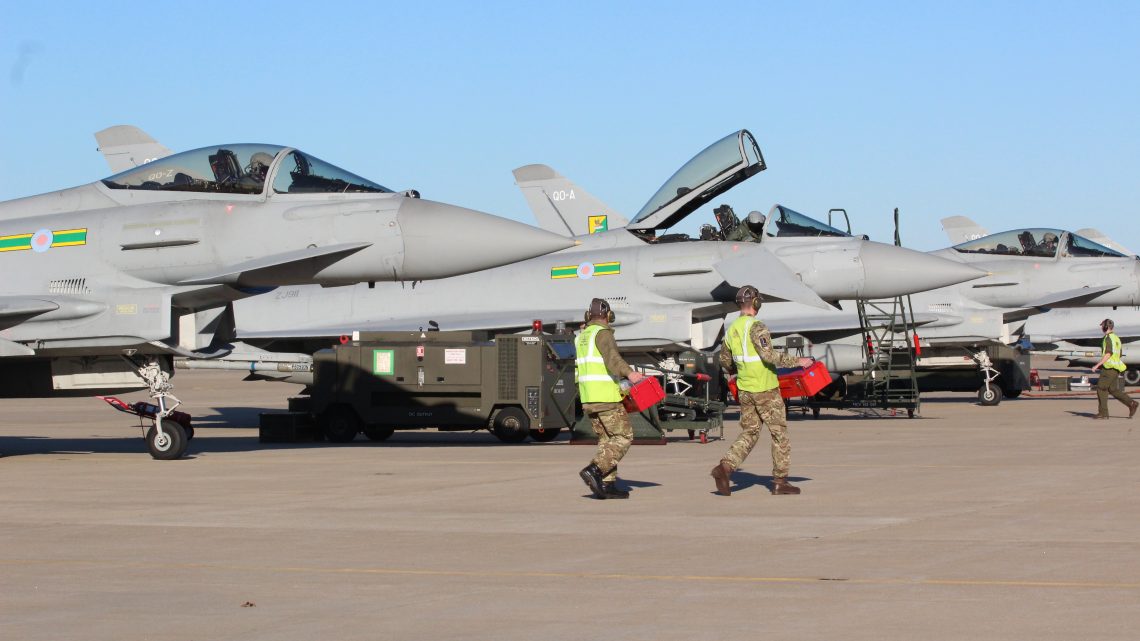 (Text and photo by Murielle Delaporte) – Air Power At Its Best: «  Operating Together As One Team »

« The Royal Air Force, the French Air Force and the United States Air Force are three little brothers, pioneers in the history of military aviation and born some fifteen years apart of each other – respectively in 1918, 1934 and 1947 -. We are to this day continuing to learn together…». It is in these terms that General Mark Welsh, Chief of Staff of the U.S. Air Force, referred to the unprecedented level of cooperation displayed during the ongoing inaugural Trilateral exercise (TEI or Trilateral Exercise Initiative) taking place at the Air Combat Command Headquarters (ACC) located at Langley Air Force Base in Langley, Virginia [1].

An exercise which is unanimously considered by all the players as the « start of something new » – as the ACC Commander, General «Hawk» Carlisle [2], put it – and meant to be repeated probably on a rotational basis in the United States, the United Kingdom and France in the years to come. As the two-week exercise concludes on December 18th, this is exactly the kind of follow up the Chiefs are currently discussing, so that in the words of the UK Chief of the Air Staff, Air Chief Marshal Sir Andrew Pulford [3], « one can operate together as one team ».

Given the timing of this very first one-of–a-kind exercise with a whole new ballgame currently going-on in the skies above Syria, the meaning of it is even more powerful proving their planners right, as they identified such a need for a closer cooperation among the three nations years ago to work better in current theater of operations and to be ready and fully interoperable for future contingencies.

Preparing The Future: Being Able to Maintain Air Superiority In A Contested Environment

The increasing complexity of threats contemporary Air Forces face – whether in their degree of sophistication, such as evolving missile threat, or in the diversification of the type of developing threats, such as the cyber challenge – have lead the Air Chiefs to work together to optimize a joint response.

As Colonel Michel Friedling, Chief of the Air Force planification bureau within the French ministry of defense[4] and in charge of the Trilateral Strategic Initiative (TSI) – from which this first exercise is born -, stressed: « the goal is to think beyond the current events to be able to work together in contested environments, (…) looking at ways to operate together and gain the necessary trust to do so no matter what the environment is. »[5]  The threat environment specifically chosen for this exercise is an anti-access/area-denial scenario, the famous A2/AD threat air planners initially worried about for the Pacific theater, but which is rapidly extending to all theaters of operation. « In the wake of the 2010 Trilateral Strategic Initiative initiated by the three Air Forces, we wanted to go further by proposing in 2013 to train with last generation fighters in a very specific mission, i.e. early entry in a non-permissive environment. Such a requirement is a real need, as our current missions mostly rely on close air support (CAS). A whole set of our capabilities (…) hence needs to be trained elsewhere », explains General Philippe Lavigne, Commander of the Fighter Brigade in Bordeaux and director of the French side of this exercise.

These sets of competences are all the more urgent to practice, since, as the RAF Chief pointed out, they have been steadily declining in the past ten years: « we have to resuscitate these baseline skills and this exercise is the first step of the journey to get there », he said.

Beyond this double-edge sword of a changing threat environment partially getting us back to some of the worst Cold War moments and of insufficient joint training on specific air skills, there is another challenge this exercise addresses as well, and that is the one of integrating rapidly evolving technologies into a common air game.

The choice of these three fighters reflects the state-of-the-art technology available in the air power world and the fact that they are just beginning to operate jointly in operation. If Typhoons and Raptors on the one hand, Typhoons and Rafales on the other hand, have been flying together, this was not the case of Raptors and Rafales just a few days ago. Integrating what is generally referred as 4th and 5th generation fighters is of course in the mind of the three Air Forces’ pilots, so they can jointly operate in any contingency. This starts with setting up and practicing TTPs (Tactics, Techniques and Procedures) to be able to communicate, especially as today’s fighters not only manoeuver in large operating areas at greater distance from each other, but also are able to shift missions while in flight. Being able to speak to each other is the first key to successful interoperability.

The first good news that is coming out so far from this exercise is the fact that, thanks to NATO standardization, the three Air Forces use very similar tactics and were therefore able to fly immediately in a very smooth manner. What is being worked on are the means of communications and common situational awareness.  Working with the F22 is even more of an interoperability challenge than it will be the case eventually with the F35, since the former can receive Link16 data, but cannot send them out (the F35 can do both).

Such an opportunity to train for two full weeks in a totally embedded manner is unprecedented and is allowing pilots to leapfrog on TTPs. But there is another aspect of the exercise that is as important and directly impact current operations, which is the support and sustainment effort behind it.

The mere ability to cross the Atlantic and train together is already an achievement on its own. For fighter pilots, the distance is no different than flying say, in the case of Rafale pilots for instance, from FrAB Saint Dizier to Northern Mali. Preparing the support of such a large-scale exercise is also something both the RAF and the FrAF are accustomed to thanks to exercises regularly hosted by the USAF, such as Redflag.

What is different however is the way it was done in a joint manner between the two European Air Forces and was considered as such by many participants as an “expeditionary opportunity” on its own. All French personnel (about 110) – besides the fighters and KC-135s pilots – were flown first from France to the UK with French transport means, but then were taken onboard British C17 and KC-30A Voyager (British A330 MRTT)[6]. This fits the philosophy set by the Lancaster agreements [7] signed, in the wake of the operation in Libya, the same year as the Trilateral Strategic Initiative. Since 2010, five years have passed and progress towards the then-envisioned Combined Joint Expeditionary Force (CJEF) [8], and a strong air component enabling it, are real. As French minister of Defence, Jean-Yves Le Drian, stressed last month as he and his British counterpart, Michael Fallon, were celebrating the fifth anniversary of the Lancaster agreement: « Together, we are engaged in sky policing missions in NATO skies. The United Kingdom provided airborne strategic transport and surveillance means in support of French operations in Mali and Central Africa. France reciprocated by supporting the British Tornado detachment deployed in the fight against Boko Haram. In a similar spirit of cooperation, the RAF Lossiemouth base in Scotland hosted French Atlantique 2 maritime patrol aircrafts. Since 2010, we have continuously worked to enhance our capability to jointly deploy on a very short notice up to 10.000 men and operate via the Combined Joint Expeditionary Force. »[9]

If « power projection » is crucial, it is however not enough to succeed in this expeditionary world, and this exercise has also been an opportunity to work on « staying power ».

Towards Enhanced Resilience In Operation: Working on Sustainment Capabilities’ Interoperability

As General Carlisle pointed out, access denial does not only take place in the air, but also on the ground. Hence the desire for these three nations who fight along on today’s theaters to be interoperable in the use of support capabilities, staff and infrastructure, and give each other’s access to a common pool of available airfields, refueling, but also maintainers and engineers among other things [10].

« There is an acknowledgement that in today’s operations Air Power is needed. Without Air Power, you loose… », notes General Welsh.  Air Power is indeed crucial to enable each phase and element of a successful military intervention in the XXIst Century, i.e. the ability to enter, project and sustain power.

If this exercise has been planned for many months, its timing with the current news cycle makes it even more relevant, while, as FrAF General Creux highlighted, it « sends a deterrence message to our foes that we can jointly fight and train at the same time on different fronts »[11]….

Photo © Typhoons Getting Ready to Take Off During The Trilateral Exercise, M. Delaporte, AFB Langley, December 2015

[4] Colonel Friedling was Commander of the FrAF Base Saint-Dizier (from which part of the Rafale present in Langley came) during the operation in Libya in 2011 (see for instance >>> http://www.defense.gouv.fr/actualites/operations/libye-l-operation-harmattan-vue-par-ceux-qui-l-ont-conduite)

[8] See the following abstract from >>> https://www.gov.uk/government/news/uk-france-declaration-on-security-and-defence :

« France and the UK agreed in November 2010 to set up a combined joint expeditionary force (CJEF). Our operation in Libya has proved the relevance of this work. Today we took additional steps to make the CJEF a real asset for our military operations in the future.

(…) We agreed the level of ambition for the CJEF: an early entry force capable of facing multiple threats up to the highest intensity, available for bilateral, NATO, European Union, United Nations or other operations. A 5-year exercise framework is in place to achieve full operating capability in 2016. »

[10] See for instance on that issue >> https://www.flightglobal.com/news/articles/usaf-could-expand-rapid-raptor-quick-reaction-depl-416920/ 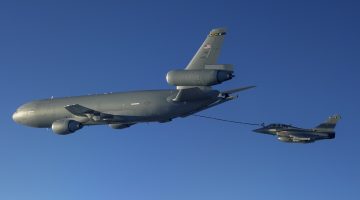 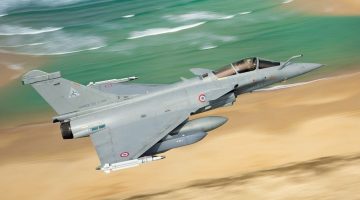 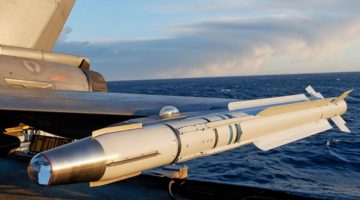