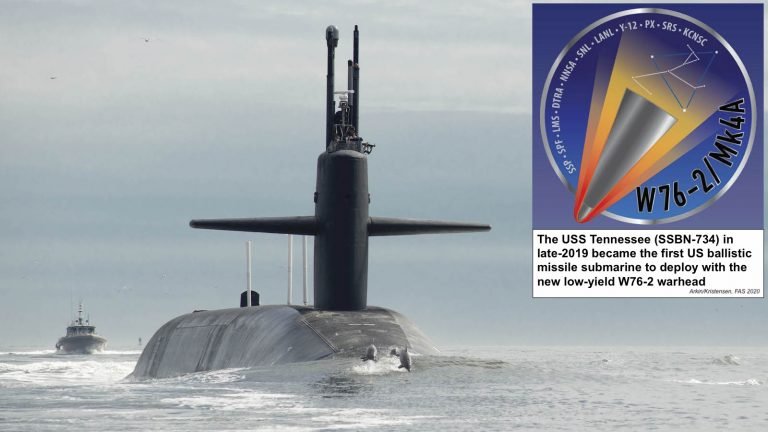 The US Navy has now deployed the new W76-2 low-yield Trident submarine warhead. The first ballistic missile submarine scheduled to deploy with the new warhead was the USS Tennessee (SSBN-734), which deployed from Kings Bay Submarine Base in Georgia during the final weeks of 2019 for a deterrent patrol in the Atlantic Ocean.

The W76-2 warhead was first announced in the Trump administration’s Nuclear Posture Review (NPR) unveiled in February 2018. There, it was described as a capability to “help counter any mistaken perception of an exploitable ‘gap’ in U.S. regional deterrence capabilities,” a reference to Russia. The justification voiced by the administration was that the United States did not have a “prompt” and useable nuclear capability that could counter – and thus deter – Russian use of its own tactical nuclear capabilities.

We estimate that one or two of the 20 missiles on the USS Tennessee and subsequent subs will be armed with the W76-2, either singly or carrying multiple warheads. Each W76-2 is estimated to have an explosive yield of about five kilotons. The remaining 18 missiles on each submarine like the Tennessee carry either the 90-kiloton W76-1 or the 455-kiloton W88. Each missile can carry up to eight warheads under current loading configurations.

The first W76-2 (known as First Production Unit, or FPU) was completed at Pantex in February 2019. At the time, NNSA said it was “on track to complete the W76-2 Initial Operational Capability warhead quantity and deliver the units to the U.S Navy by the end of Fiscal Year 2019” (30 September 2019). We estimate approximately 50 W76-2 warheads were produced, a low-cost add-on to improved W76 Mod 1 strategic Trident warheads which had just finished their own production run.

The NPR explicitly justified the W76-2 as a response to Russia allegedly lowering the threshold for first-use of its own tactical nuclear weapons in a limited regional conflict. Nuclear advocates argue that the Kremlin has developed an “escalate-to-deescalate” or “escalate-to-win” nuclear strategy, where it plans to use nuclear weapons if Russia failed in any conventional aggression against NATO. The existence of an actual “escalate-to-deescalate” doctrine is hotly debated, though there is evidence that Russia has war gamed early nuclear use in a European conflict.

Based upon the supposed “escalate-to-deescalate” doctrine, the February 2018 NPR claims that the W76-2 is needed to “help counter any mistaken perception of an exploitable ‘gap’ in U.S. regional deterrence capabilities.” The National Nuclear Security Administration (NNSA) has further explained that the “W76-2 will allow for tailored deterrence in the face of evolving threats” and gives the US “an assured ability to respond in kind to a low-yield nuclear attack.”

There is no firm evidence that a Russian nuclear decision regarding the risk involved in nuclear escalation is dependent on the yield of a US nuclear weapon. Moreover, the United States already has a large number of weapons in its nuclear arsenal that have low-yield options – about 1,000 by our estimate. This includes nuclear cruise missiles for B-52 bombers and B61 gravity bombs for B-2 bombers and tactical fighter jets.

Yes, but – so the W76-2 advocates argue – these low-yield warheads are delivered by aircraft that may not be able to penetrate Russia’s new advanced air-defenses. But the W76-2 on a Trident ballistic missile can. Nuclear advocates also argue the United States would be constrained from employing fighter aircraft-based B61 nuclear bombs or “self-deterred” from employing more powerful strategic nuclear weapons. In addition to penetration of Russian air defenses, there is also the question of NATO alliance consultation and approval of an American nuclear strike. Only a low-yield and quick reaction ballistic-missile can restore deterrence, they say. Or so the argument goes.

All of this sounds like good old-fashioned Cold War warfighting. In the past, every tactical nuclear weapon has been justified with this line of argument, that smaller yields and “prompt” use – once achieved through forward European basing of thousands of warheads – was needed to deter. Now the low-yield W76-2 warhead gives the United States a weapon its advocates say is more useable, and thus more effective as a deterrent, really no change from previous articulations of nuclear strategy.

The authors of the NPR also saw the dilemma of suggesting a more usable weapon. They thus explained that the W76-2 was “not intended to enable, nor does it enable, ‘nuclear war-fighting.’ Nor will it lower the nuclear threshold.” In other words, while Russian low-yield nuclear weapons lower the threshold making nuclear use more likely, U.S. low-yield weapons instead “raise the nuclear threshold” and make nuclear use less likely. Undersecretary of Defense for Policy John Rood even told reporters that the W76-2 would be “very stabilizing” and in no way supports U.S. early use of nuclear weapons, even though the Nuclear Posture Review explicitly stated the warhead was needed for “prompt response” strike options against Russian early use of nuclear weapons. 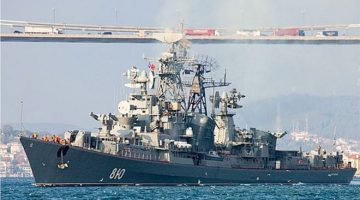