By Pierre Tran – Naval Group and its Italian partner Fincantieri plan to set up a 50-50 joint venture as a first step to setting up their industrial alliance, the two companies said.
“The establishment of this JV represents a first step towards the creation of the Alliance,” the companies said in an Oct. 23 joint statement on the opening day of the Euronaval trade show.
The French and Italian governments said they backed that cross-border corporate move, with the joint venture due to be created next year.
Previously, Naval Group had sought an exchange of shares of 5-10 percent between itself and its Italian partner, to seal their partnership along the lines set by Renault with its Japanese partners Mitsubishi and Nissan.
But the French Economy and Finance Ministry was reported to be cool over that proposed cross-shareholding,for political reasons. The Italian coalition government is suffused by an anti-European Union and anti-establishment sentiment, a political view seen by some in the French administration as unhelpful.
Thales holds a 35 percent stake in Naval Group, with the government holding most of the rest of the stock.
The planned joint venture seeks to achieve commercial and industrial benefits with:
– joint offers for Franco-Italian programs and in export markets
– more efficient supply, with cross-sourcing, value for money and greater scale of purchase
– joint research and innovation to deliver “operational superiority” to clients
– “cross-fertilization” between the two partner companies, sharing test facilities, tools and expertise.
France and Italy “support the key initiatives set by Fincantieri and Naval Group which intend to swiftly put in place, notably setting up in 2019, a joint venture of equal parts, for which the aim is to reach commercial and industrial synergies,” the two governments said in an Oct. 23 statement.
The two companies are studying a pitch of a “common offer for the first studies for the mid-life upgrade of the French and Italian Horizon-class air defense destroyers with a common combat management system (CMS),” the companies said.
A government-to-government agreement is needed to protect sovereign assets, cooperation between the French and Italian teams and boost “coherence in national assistance programs,” the companies said. Naval Group and Fincantieri have already linked up in a “common industrial collaboration” to deliver to the French Navy four auxiliary tankers, based on the Italian Vulcano design.
Florence Parly, French Armed Forces Minister and Bruno Le Maire,  Economy and Finance Minister, met here on Tuesday counterparts Italian Defense Minister Elisabetta Trenta and Luigi Di Maio, Deputy Prime Minister and Economic Development Minister.
Illustration: www.navyrecognition.com
Tags: Euronaval 2018Fincantierinaval group 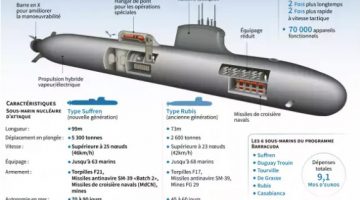