Germany's Economy Ministry has approved plans by defence group Rheinmetall to deliver an armoured vehicle assembly plant to Algeria, according to a reply sent by the ministry following a request from a member of parliament. 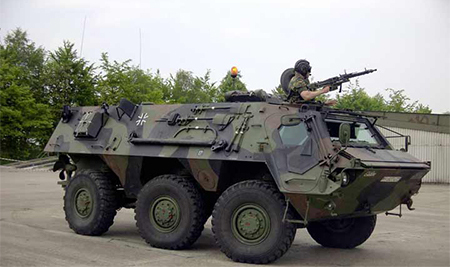 Germany’s Economy Ministry has approved plans by defence group Rheinmetall to deliver an armoured vehicle assembly plant to Algeria, according to a reply sent by the ministry following a request from a member of parliament.

Rheinmetall’s delivery to Algeria includes a production line to assemble the Fuchs armoured vehicle, as well as other parts valued at more than 28 million euros ($37 million), according to the document. German magazine Der Spiegel had earlier reported on the approval, according to Reuters.The planned factory, located about 400 km east of Algeria’s capital Algiers, is to build nearly 1,000 armoured vehicles, Der Spiegel said, adding parts would be exported to the country, where workers would assemble them. It was earlier reported that 980 Fuchs 2 vehicles will be built as part of a 2.7 billion euro deal. Apparently Algeria has agreed not to sell the vehicles to other countries.The deal is the result of a visit to Algeria by German Chancellor Angela Merkel in 2008 and was largely approved by the previous government, Der Spiegel said.Algeria has ordered around ten billion euros worth of military equipment from Germany in the last few years, including two Meko A200 frigates from Thyssen-Drupp and SUVs and trucks from Daimler. Last year Algeria purchased 825 million euros worth of tank parts, SUVs and trucks from Germany.

In 2011 Germany authorised the export of 54 Fuchs vehicles worth 195 million euros to Algeria, as well as other military vehicles worth 286 million euros, according to Der Spiegel.Algeria is greatly expanding its military and just this year ordered two Kilo class diesel electric submarines from Russia, and in 2015 the Algerian Navy will take delivery of the landing and logistic support ship Kalaat Beni-Abbes. 42 Mi-28N Night Hunter attack helicopters and six Mi-26T2 cargo helicopters were ordered this year in a nearly $3 billion deal from Russia. Also this year it emerged that Algeria’s military has acquired self-propelled artillery from China.Earlier this year, Economy Minister Sigmar Gabriel said he would tighten rules on arms exports, curbing sales to states such as Qatar and Saudi Arabia, whose purchases had previously helped make Germany the world’s third largest arms exporter, Reuters reported.Germany earlier this month permanently halted Rheinmetall’s planned export of combat simulation equipment to Russia, going beyond recently imposed European Union sanctions which block future defence contracts.As a result, Rheinmetall cut its 2014 operating profit aim, and now expects group earnings before interest and tax (EBIT) of between 200 million euros and 220 million euros, down from a previous target range of 230 million to 250 million.

Republished with permission of our partner defenceWeb.