Textron Systems Weapon & Sensor Systems announced its G-CLAWTM precision guided weapon successfully completed a live-fire demonstration recently at the U.S. Army’s Yuma Proving Ground in Arizona.  The GPS-guided G-CLAW struck within four meters of the designation spot and detonated on the target as intended, proving the weapon’s guidance, warhead and its fuzing capability.

The weapon is on display during the Air Force Association’s (AFA) Air & Space Conference and Technology Exposition, Sept.15 – 17, at the Textron Systems booth (#709). Invited guests of Textron AirLand will be able to view the Scorpion ISR/Strike jet, equipped with G-CLAW, while the aircraft is on display at Ronald Reagan Washington National Airport for the duration of the AFA conference.

G-CLAW is a lightweight precision guided glide weapon with a scalable blast fragmenting warhead designed to be highly effective against vehicle and personnel targets. The Textron Systems team demonstrated G-CLAW by dropping it from an altitude of 10,000 feet out of a Cessna Caravan aircraft equipped with a U.S. Special Operations Command (USSOCOM) Common Launch Tube (CLT) dispenser.

Textron Systems Weapon & Sensor Systems is conducting G-CLAW testing and development as part of a Cooperative Research and Development Agreement (CRADA) with the USSOCOM Program Executive Office (PEO) Fixed Wing. This was the last in a series of five tests conducted in 2014 to prove out the new weapon to Technology Readiness Level (TRL) 7.

“What we accomplished at Yuma Proving Ground further validates the effectiveness of this highly flexible weapon system,” explained Ian Walsh, Weapon & Sensor Systems senior vice president and general manager. “This demonstration sets the stage for further integration of additional features as well as testing from other aircraft platforms – all toward the goal of providing the warfighter with an accurate and affordable weapon system designed for static or moving targets.”

G-CLAW incorporates a Height of Burst sensor for optimal effects against a broad target set. In addition to its flexible, multiple warhead lethal capability, G-CLAW’s modular design supports rapid incorporation of emerging technologies in guidance, seekers and effects. It can be adapted to changing mission requirements at minimum development cost.

G-CLAW can be integrated onto an array of aircraft including Class IV Unmanned Aerial Vehicles, light attack aircraft – including Textron Aviation’s Beechcraft® AT-6 and Textron AirLand’s ScorpionTM – and converted commercial aircraft, such as a Cessna Caravan, from standard rack dispensers. 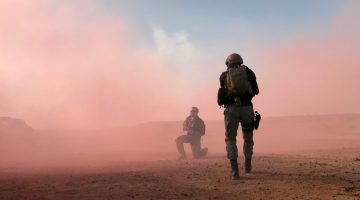