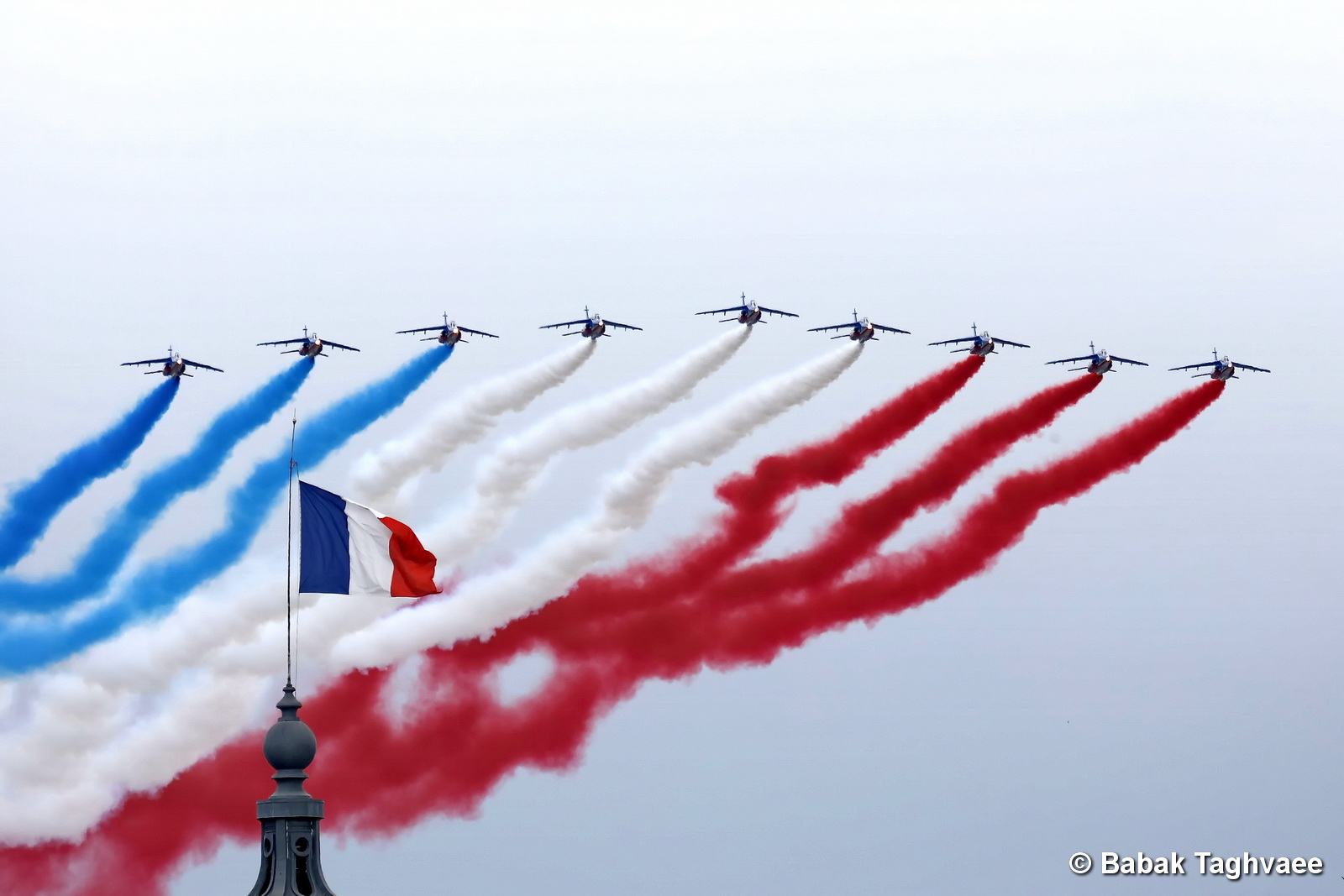 Preparations for the flypasts took over a month for all the flight units and their personnel. It was started in the units when each one of the pilots involved in the flypasts practiced formation flight training. Then it continued until two group rehearsals were first held in 123 Air Base Orléans-Bricy on 30 June and then over Paris on 9 July 2020. The first group rehearsal involved 39 airplanes (30 from the air force) and 8 helicopters including a civilian Airbus Helicopter (Eurocopter) EC225LP Super Puma of Airtelis with F-HRLI civil register on loan by the Air Force. In addition to them, 2 Typhoon FGR4 fighter jets from 1(F)Sq (1st Fighter Squadron) of Royal Air Force from RAF Lossiemouth participated. The second rehearsal involved 27 airplanes and 17 helicopters among them a Luftwaffe’s Airbus A400M Atlas heavy cargo airplane was involved on 9 July 2020.

Due to low visibility and light rain in the west of France which reached Paris around 11:45 on 14 July, the number of airplanes which were supposed to take part in the parade was reduced from 52 to 42 and led to the cancellation of one of total 20 formation flights over the Champs-Elysees avenue. A day before the parade, all of the 19 French Air Force fighter jets which were scheduled to take part in the parade as well as their spare airplanes were forward deployed from their mother bases to Air Base 105 at Evreux. Between 11:00 and 12:15, seven Rafale Bs of BA113 from Saint Dizier, three Mirage 2000-5Fs of EC01.002, BA116 from Luxeuil arrived Evreux. Seven Rafale Cs of BA118 at Mont-de-Marsen landed at Evreux at 12:30 local time. Two Mirage 2000Bs of EC02.005 arrived at Evreux at 13:12. They were followed by a third Mirage 2000B of the Squadron at 13:45.

The other participants of the flypasts were an EC135T2 helicopter and an EC145 helicopter of the Gendarmerie Aviation, an EC145 medical helicopter of Civil Security, a CL-415 firefighter airplane of the Civil Security, a Dash 8-402Q(MR) firefighter airplane, two Typhoon FGR4 multirole fighter jets of RAF’s 1(F)Sq including ZK368 piloted by a French exchange pilot and a Luftwaffe’s A400M cargo airplane. A Voyager KC2 tanker airplane of Royal Air Force also refueled the Typhoon FGR4s twice over the English channel during their journey from RAF Lossiemouth to Paris and back the same day.

Overall the number of the participating airplanes and helicopter in 2020’s flypasts was lesser that previous year but the French Air Force, Navy Aviation, Army Aviation, Gendarmerie Aviation and Civil Security proved their high level of interoperability and operational readiness not just for military operations during wartime but also for operations during peacetime including the Operation Résilience. This operation was a response to the COVID19 pandemic in France with the French Air Force’s Airbus A400M heavy transport airplanes of ET01.061 and EC725R2 combat search and rescue helicopters of EH01.067 playing a role in MEDEVAC (Medical Evacuation) of hundreds of Corona Virus infected patients. Bastille Day this year was meant to honour the medical personnel – both military and civil –whose lives are dedicated to medical support. 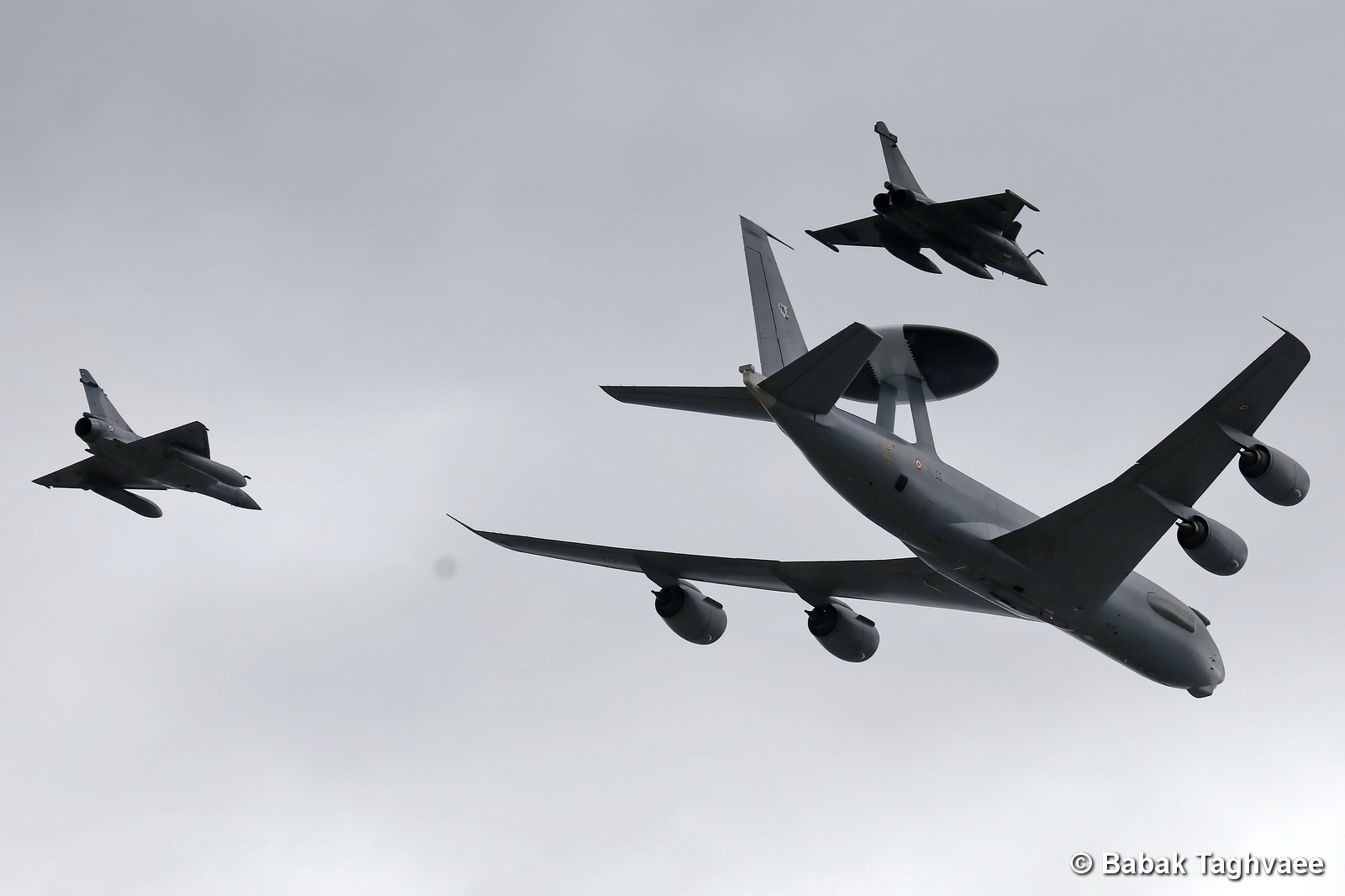